It’s been known for many years that an oil spill can mean disaster for an ecosystem.  One need only to go back to 2010 and see the damage caused by the Deepwater Horizon oil spill in the Gulf of Mexico to see how it decimated the coasts of Florida, Alabama, Mississippi, and Louisiana. Covering an area the size of the state of Oklahoma, oil spill detection in this situation became a top priority to contain and respond to the damage.  The shock of the disaster drove a national effort on the part of both governmental organizations and private industry to improve both our containment capabilities and also our oil spill detection capabilities.

During this time Polaris Sensor Technologies was working on a disruptive technology to add polarization data to thermal imaging and in 2015 introduced the Pyxis camera, a combined infrared/polarization based camera that allows for improved detection capability of oil spills and other petroleum based products.  Pyxis takes both long wave infrared (LWIR) data and polarization data at the same time from the same image and combines them.  Why is this an important accomplishment?  Because there are times when LWIR radiation provides a stronger signal allowing for easier detection of an oil slick.  However, there are also many times such as night time or when oil has reached thermal equilibrium with the surrounding water when polarization gives a stronger signal.  Up to 2015, the added detection capability of polarization wasn’t an option because imaging systems with polarization imaging capability didn’t exist.  You had thermal imagery, radar, and not much else.  Now, with the addition of polarization data to LWIR thermal imagery data, a much stronger and more reliable signal can be detected since polarization won’t detect seaweed and other biological matter that often results in false positives when using just LWIR data alone.

When comparing the two methods on their own, polarization by itself usually provides a stronger signal over a wider variety of conditions than is provided by LWIR thermal imagery.  However, the Pyxis camera combines the two methods allowing for the viewer to see only the infrared image, only the polarization image, or a superimposed image where both thermal imagery and polarization imagery are displayed at the same time.  This means that it doesn’t matter which type of signal is stronger at any one moment because both sets of data are captured in the same image.

A great deal of research has gone into determining these performance parameters.  A series of tests were carried out in 2017 at the Ohmsett National Oil Spill Response and Renewable Energy Test Facility located in Leonardo, New Jersey, USA.  Figure 1 below shows the differences in performance between visible, thermal, and polarization based cameras at three different times of day 3:27 PM, 5:17 PM, and 9:27 PM.  Each of the images shows 2 floating “boxes” which are simply 4 walls with no bottom containing oil on top of water in a pool.  These walls help prevent the oil from leaking out into the surrounding pool water.  As expected, the visible camera shows good contrast between the oil (black) and the water (clear in a yellow colored pool) at 3:27 PM and 5:17 PM but just shows a black screen after sundown in the picture taken at 9:27 PM.  The thermal imagery shows relatively weak contrast in all three pictures between the gray water and the lighter gray oil but at least you get some image at night time when compared to the visible camera.  However, polarization gives a consistently strong contrast of black oil on gray water at all times of day. 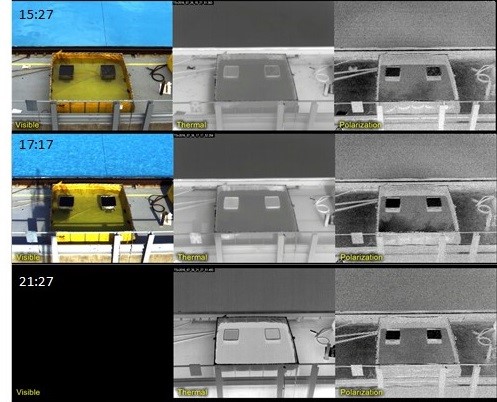 Figure 1.  Comparison of visible, thermal IR, and polarization imagery of oil on water at the

Ohmsett Oil Spill Response facility operated by the Bureau of Safety and Environmental Enforcement (BSEE) and examined thick (on the left) and thin (on the right) oil floating on water in 2017.

Figure 2 below compares thermal IR (red) and polarization (blue) camera imagery contrast of the oil vs. water signal taken from the same test as shown in Figure 1.  A test to show night time performance between thermal imagery and polarization imagery was conducted from 3:00 PM in the afternoon to 9:00 AM the following morning.  This test shows that there was superior contrast obtained by polarization as opposed to thermal IR imagery at almost all times during the entire 18-hour test.  A small window of time occurred when the rising sun heated up the oil faster than the water resulting in thermal imagery having a stronger contrast starting somewhere around 8:00 AM but by 9:00 AM the polarization imagery once again showed a stronger signal than did the LWIR data.

So Figures 1 and 2 show the results in calm water.  What happens when wave action complicates the situation?  Figure 3 below shows the difference in performance of visible, thermal, and polarization imagery in the presence of waves.  The result shows that, if you didn’t know to look for oil in the image, then you wouldn’t know that a contaminant was in the water in either the visible or the thermal imagery.  Only the polarization image provides a strong enough contrast to make it obvious that some kind of contamination exists.  In addition, it was expected that the oil would stay in the “boxes” shown in the middle of the image.  However, very shortly after the wave pool was turned on, the oil quickly migrated out of the containment boxes and spread over a much larger surface area and polarization was easily able to clearly show the spread. 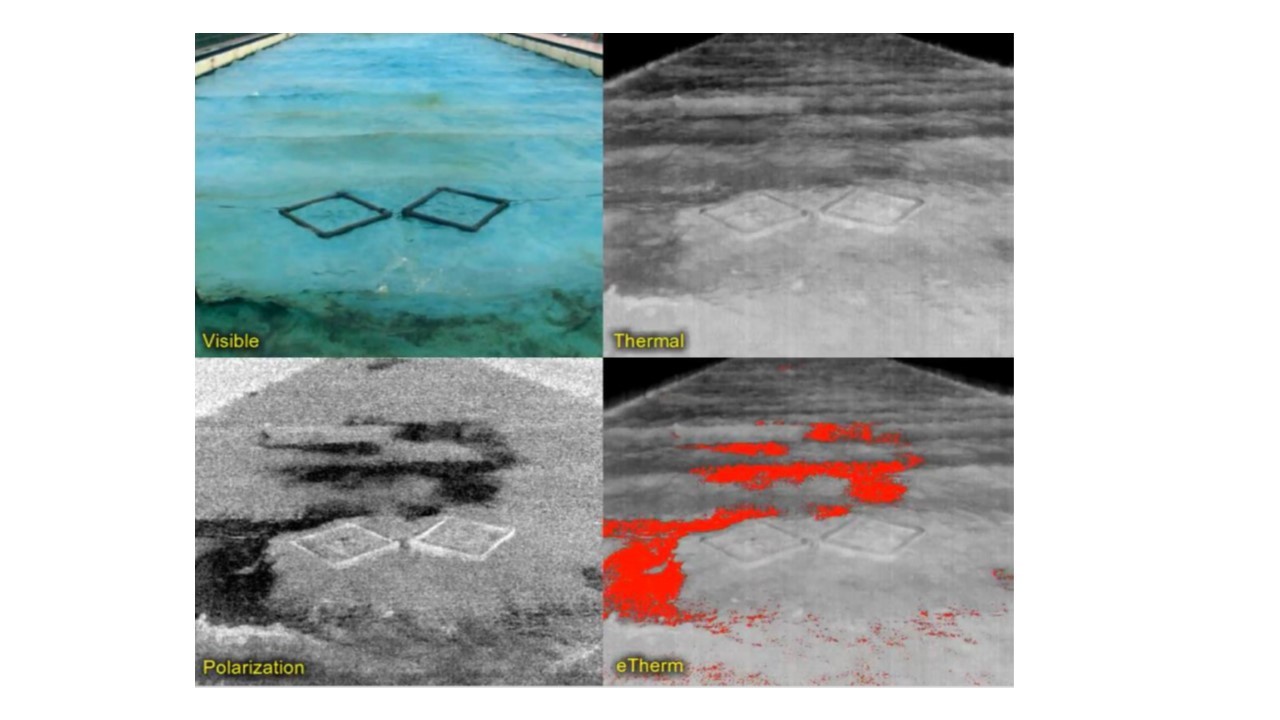 Detecting solid oil slicks on the surface of the water is one thing, but very often oil doesn’t form a solid sheet and becomes emulsified.  In a real oil spill, floating oil ages and changes properties significantly due the action of UV radiation and wave action.  As the water content increases, the oil becomes emulsified and detection can change significantly, in particular IR detection can suffer dramatically.  Polarization yields significant benefits under these conditions also.  One of the tests conducted during our Ohmsett research created emulsified oil by leaving oil on the surface of a calm pool for several days exposed to the sunlight so that any chemical changes caused by UV radiation had time to take effect.  One hour before the test was conducted the wave generator was turned on.  After this one-hour period the image below shown in figure 4 was taken.  Despite the mixing and emulsifying that occurs from the wave action, it can be seen that a strong signal is obtained in the visible waveband and that polarization also strongly identifies the oil but thermal imagery is unable to clearly identify the oil in the water. 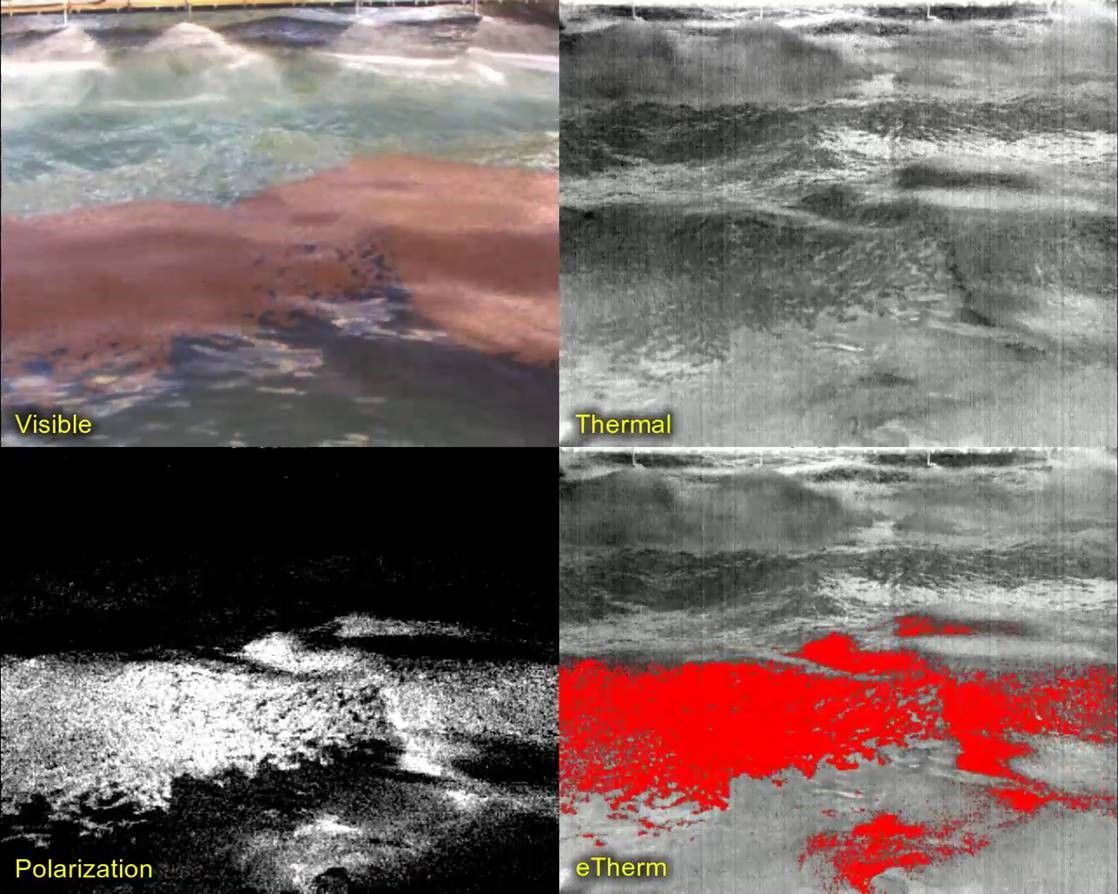 A chart showing a summary of oil detection testing results from Ohmsett and other testing is presented here.

These tests and others not mentioned here show that, in most situations, polarization imagery gives a much stronger signal when trying to detect oil on water than does thermal IR imagery.  However, the Pyxis camera from Polaris Sensor Technologies doesn’t make you choose between polarization or thermal imagery because Pyxis gives you both.  The Pyxis thermal/polarization hybrid camera captures the LWIR data as well as the polarization data in a single image and allows the user to view just the thermal, just the polarization, or both combined into a single image called eTherm.  The testing above shows that Pyxis provides better detection capabilities for oil on water at night, in both calm water and under breaking waves, and when the oil has become emulsified.  Other less rigorous tests imply that vegetation and water fowl that have oil on them can also be identified by Pyxis (it is difficult to ethically do this testing on a large scale).  Additionally, due to the nature of polarization, the minimum detectable thickness of oil with the polarization signature is right around 30 microns depending on ocean and weather conditions and this is very close to the minimum thickness that is typically considered to be worthy of recovery so the physics itself helps prevent false positive detections.

Small enough and light enough (fits in a 4″ x 2″ x 2″ envelope, weighs less than one half pound) to fit on a drone but robust enough to endure constant salt spray when mounted on an oil rig in the open ocean, the Pyxis camera is a leap forward in oil detection and is a valuable tool for use in our efforts to keep our waterways and coastlines clean and the ecology healthy. 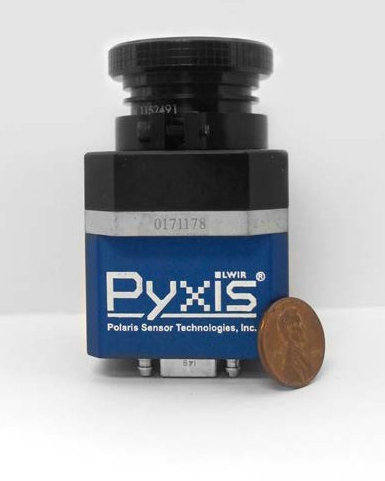